The English higher education system is very well known for its high standards and intelligent graduates; many people who have obtained high honors such as Nobel Peace Prizes have attended English universities. Like many higher education institutions, most students will start going to university from age 18 on, and study for some sort of academic degree.

System of Higher Education in UK: 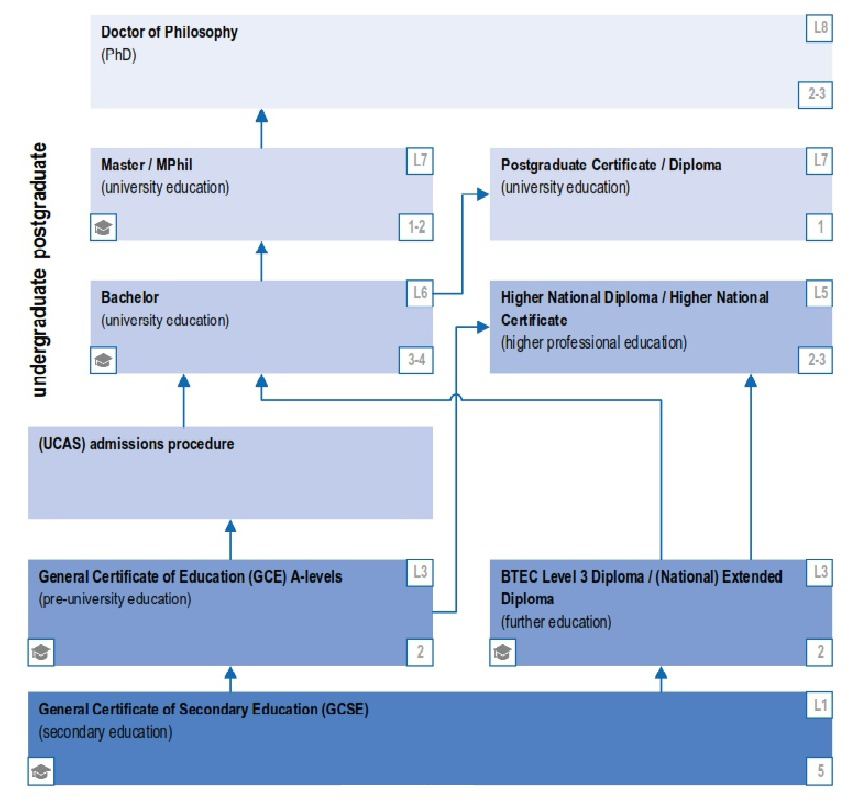 Red Brick originally referred to 6 Civic universities that were given charters in the late 19th Century in the big industrial cities of the UK. The term Red Brick referred to a building at the University of Liverpool which was built from Red Bricks, but the term also referred more generally to “new” buildings/institutions.

Plate Glass Universities were the next batch of universities to be given royal charter between 1963 and 1992.

There are a group of universities that were previously called Polytechnics and then given university status; these institutions are referred to as “New Universities”.

There are also a number of other universities that do not fit into any of the above group.

HND and foundation degrees are level 5 work-based courses, which are equal two years at university. They can lead straight into a career, or be ‘topped up’ by further study to become a full Bachelor’s degree. Full-time HND degree will take two years to complete.

A Bachelor’s degree is the most common type of undergraduate degree and can be studied straight after finishing higher education. It’s class as a level 6 qualification. A bachelor’s degree will usually take 3 to 4 years if studied full-time. This type of degree requires secondary education complete certificate. Graduation from this course will allow you to carry out postgraduate study.

A master’s degree is the most common type of postgraduate qualification, and involves a more in-depth level of study than a bachelor’s degree. They are design to focus on a specific area of a wider subject and they can either be taught or research based courses. It’s classed as a level 7 qualification. If studied full-time, this degree will take one to two years and if you studied part-time, then it will take two to four years.

PGCE is a level 7 qualification, which combines practical placements with teaching theory. Types of PGCE include early years, primary, secondary and further education. It’s popular route for graduates who want to use their expertise to teach others. If you studied full-time, this degree will take 9 months to complete or if you studied part-time then it will take 12 to 15 months. A degree level certificate is required to study PGCE.

PhD is a level 8 qualification. It involves independent and original research into a specific field or subject, which is used to write a lengthy thesis that’s worthy of publication. Full-time PhD will take usually 3 to 4 years and part-time PhD will take around 6 year.

List of Universities in UK
UK University Rankings
Why Study in UK
Education System in UK
What can I Study in UK?
Cost of Education in UK
Living in UK
Admission Requirements
Documents Required
Visa Process
Career after Studies in UK
how can we help you?

Contact us at the Consulting WP office nearest to you or submit a business inquiry online.

I-Studentz helped me a lot in studying my masters in the USA and cracking my VISA interview. They had given many mock sessions for my VISA interview. I Suggest my friends and students to consult in this consultant. Thank you very much I-Studentz especially Sarita madam.